July 23, 2016 – We’re excited to partner with the Fifth Street Brewpub on a 3-part Hop Harvest celebration this year. If you’re not a member yet, sign up at the Brewpub and then join us for a members-only dinner on the hops farm while the bines are at their peak. We’ll follow up with picking/brewing and tapping celebrations later in the growing season. 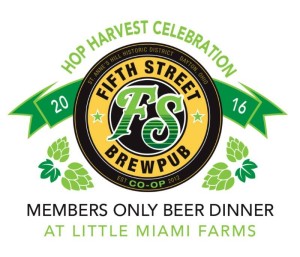 On Sunday, Aug. 6, we followed the dinner with a Hop Picking Party at Fifth Street. The fresh-picked hops were used in harvest brew the next day.

Watch for a release date of the 2016 fresh-hopped ale!

Visit our Facebook page to keep up to date on Little Miami Farms!

We are so pleased to have the opportunity to supply our butternut squash to Carillon Brewing Co.!!! Drink local and try some this weekend - cheers 🍻 ... See MoreSee Less

If you missed us today in Oakwood, you have one more opportunity! We’ll be at the last This Old Farmer's Market on Sunday from noon-3p for another day of fall fun 🎃🍁 Hope to see you there!! ... See MoreSee Less